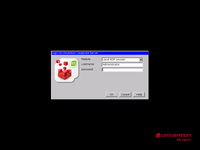 XRDP is a daemon running on UCS, which allows users to open a X session on the server using the Remote Desktop Protocol (RDP). This protocol is natively supported by Microsoft Windows and many other operating systems and thus does not require additional software to be installed on the client PCs.

By default all users of the UNIX group Domain Admins are allowed to connect using RDP. The name of the group can be changed by setting the UCR variable xrdp/access/admins.

VNC
Virtual Network Connect provides a simpler protocol, which is used by KVM for example.
ssh
only provides a text console by default, but can be used to tunnel X sessions natively.