UCS Virtual Machine Manager (UVMM) is a service in Univention Corporate Server (UCS) for the administration of a virtualization infrastructure. The physical servers for virtualization, virtual machines, hard drives and CD-ROM and DVD images are administrated with UVMM. UVMM is integrated in UCS and supports the virtualization technologies Xen and KVM.

This quickstart guide serves as a basis for the use of UVMM and describes the setup of one single virtualization server. As an example two virtual machines are created, one additional UCS system and a Windows system.

A detailed description of UVMM can be found in UCS manual.

The following simple preparation is needed to start with UCS Virtual Machine Manager.

KVM is a virtualization technology integrated directly in the Linux kernel which only functions on computers whose CPU includes support for virtualization (VT for Intel CPUs and AMD-V for AMD processors). A detailed description can be found in Wikipedia at http://en.wikipedia.org/wiki/Kernel-based_Virtual_Machine.

Xen is a virtualization technology based on a hypervisor model and which can be used on all Intel/AMD-CPUs. A detailed description can be found in Wikipedia at http://en.wikipedia.org/wiki/Xen.

The UCS Virtual Machine Manager accesses the underlying virtualization layers via an abstraction library (libvirt). Administration of the systems in UVMM is thus identical even though there are some functional differences in the libvirt support. The most important is that the use of snapshots is currently only possible with KVM.

A virtualization environment based on UCS is composed of two components; the virtualization servers (based on Xen or KVM) and the UCS Virtual Machine Manager (UVMM).

UCS is available in 32- and 64-bit versions. A 64-bit system (amd64) is recommended for use as a virtualization server.

Each UCS system is assigned a system role. The following table shows which system roles can be used for which virtualization component:

This quickstart guide sets up a new UCS environment and begins with the installation of a DC master, which is used as the physical server for virtualization and provides the UVMM service at the same time. All three modules can also be installed on separate systems.

Following the confirmation in the installer, UCS is installed. The system needs to be restarted at the end of the installation.

Following the installation and update, the UMC can be opened in the web browser at https://[IP-address]/univention-management-console/ . The login data are the user name Administrator and the root password specified during the installation. 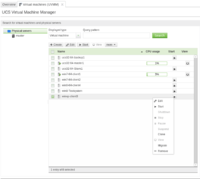 The UMC module Virtual machines (UVMM) provides predefined profiles for the creation of virtual instances in the wizard. As such, the majority of settings are already filled in with default values. The values can be subsequently changed in the wizard or later in the advanced settings. At present, depending of the employed computer architecture i386 or amd64, the following predefined profiles are available.

UVMM uses storage pools to access hard drive and ISO images. Storage pools can be a local directory on a virtualization server or an NFS share, iSCSI target or an LVM volume.

In this quickstart guide, the image files are saved locally on the computer. In an environment with several virtualization servers, it is recommended to store the data in a central share. More detailed information can be found in the extended documentation (currently only available in German).

To create a virtual instance, Create' needs to be clicked. A wizard guides the user through the individual steps. A UCS system is virtualized as a example for this article. The outline data for the configuration of the virtual instance is specified, a UCS DVD is mounted as a DVD drive and a hard drive is created.

Now a DVD drive is added in the drive settings dialogue. Add needs to be clicked for this.

Now a DVD drive is mounted in the drive settings dialogue. Add drive needs to be clicked for this.

To create the virtual instance, click on Finish at the bottom of the page.

Installation of UCS in the virtual machine

Once the virtual instance has been saved, the UCS 3.2 DVD should be inserted in the drive of the virtualization server. The virtual machine in UVMM must now be started with the operation

Installing Windows on a virtual machine

To be able to virtualize Windows, a virtual maschine is created analogous to the UCS setup. One of the available Windows profiles must be selected.

loads the virtual instance and starts the Windows Installer from the DVD image. The installation can be performed via VNC by clicking on the view icon

After successful installation of the Windows system, we recommend using the remote desktop protocol (RDP) for accessing to the virtual machine.

Access via RDP — and particularly displaying the cursor — is considerably smoother in comparison with VNC.

RDP clients are shipped with Microsoft Windows as standard as of Windows XP. For Linux-based systems the programs rdesktop and krdc are delivered with Univention Corporate Server.

Installation of support drivers in the virtualized Windows system

The performance of virtualized Windows systems can be increased considerably by installing support drivers.

Help on UVMM is offered in the Univention Forum.

Errors in the documentation or programs can be reported directly in the Univention Bugzilla.

Quickstart Guides for UCS 3 for