The article describes operation and first steps of the Univention Corporate Server (UCS) virtualization image. The image is provided in the OVF format, an open standard for virtual machines.

A sufficiently recent VMware Player (>= 5) is recommended. The image can also be used with virtualisation solutions like VirtualBox.

The VMware image (Download) includes a complete installed and pre-configured UCS system in the system role domain controller master. The system offers more possibilities than the online demo system. It is a complete UCS system with access restrictions to test functionality and application.

Virtualization with UCS Virtual Machine Manager (UVMM) can not be tested with a virtualized UCS system. The installation of UCS on hardware is required for virtualization.

After the installation of VMware Player, the UCS VMware image can be started on Linux with the following command:

Upon start the boot menu appears. The default chosen entry Univention Corporate Server … will be started either with the return key or automatically after 5 seconds. After the first boot, UCS opens the wizard for the base settings. 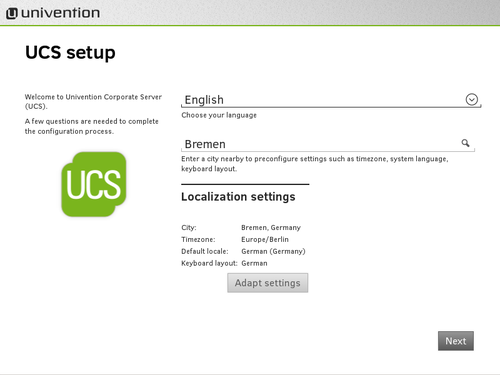 The network access in the VMware image is set to "Bridged mode" in order to enable a network configuration for access to the test system from inside the local network. The wizard guides the user through the following steps of the initial configuration UCS as VMware image.

First steps in the UCS system

The system can be accessed with the already present accounts "root" and "Administrator" after the reboot. Both user accounts use the Root password that has been set during the base settings.

A SSH server is installed on the UCS system. The user "root" can login via SSH. With the SSH login the user has direct access to the system (e.g. univention-config-registry or view log files in /var/log/…).

The UCS management system can be accessed with a web browser through the configured IP address during the initial configuration. The URL is https://<IP address>. For example, if the suggested IP address 192.168.0.140 has been set, the URL would be https://192.168.0.140.

KDE is installed as desktop on the UCS system. It allows users to have a graphical login to the system. The user "root" is not allowed to login to the desktop by default. To test the graphical environment without adding a new user, the user "Administrator" may be used.

The following settings are required:

After the Microsoft Windows client computer has joined the domain, an entry for the joined computer is created in the computer management of the domain management.

If additional UCS systems (servers or desktops) should be operated in the environment, they have to be instantiated seperately. It is possible to operate the UCS system repeatedly in different system roles. Detailed information about the installation can be found in the UCS Quickstart Guide and in the UCS manual.

Univention Corporate Server differs from other Linux distributions among other things by its sophisticated management system. The UCS management system is well-rooted into several areas of the system. That is the reason why UCS includes concepts and mechanisms like domain management or Univention Configuration Registry for the administration of several UCS systems that are not know from other distributions. Univention Corporate Server - Manual for users and administrators is the available documentation for UCS.

Announcements and discussion about Univention Corporate Server can be found in the Univention Forum. Feedback is welcome in the Forum.

Further information to start with Univention Corporate Server can found at the following entry points:

Quickstart Guides for UCS 3 for