Note: This article is not yet reviewed.

The default partitioning of a Univention Corporate Client separates user data and system data. This allows a complete replacement of the system image with a newer one without loosing user data or the domain join status. Usually, these images are distributed through an automatically created NFS share on the Univention Corporate Server that has the UCC-App installed.

In some cases one might not want to use a Univention Corporate Server to provide the NFS share. E.g. in a small branch office with very poor connection to the main office. Using a Univention Corporate Client as NFS server for the other UCCs, might be an alternative that is described in this article. Since the free space is always limited on a thinclient, one probably wants to use a USB pendrive containing the images.

Please note that this article does not take care of the PXE configuration. As this article adresses scenarios with small branch offices, we assume that the Univention Corporate Clients boot directly from harddisk and not via PXE. If that is not the case in your scenario, you need to adjust the PXE settings: UCC PXE rollout

The following steps need to be completed:

Install a UCC as Image-Distribution-Server

At first, we need to install the designated UCC-NFS-Image-Server with a standard UCC-Image. This should be done according to the UCC manual. In the following we will assume that the official UCC thin client image is used.

After the installation finished, log in to the UCC via ssh:

We need to disable the overlay filesystem and the read-only mode:

We assume that a USB pendrive is used to contain the image(s). So we need to create a directory to mount the USB pendrive and copy the images from the Univention Corporate Server that holds the original UCC images:

For upcoming reboots you probably want to add this to your /etc/fstab to make sure the USB pendrive gets mounted automatically:

Now we can install the NFS server components:

To configure the desired NFS share, append the following to /etc/exports:

Alternatively, restarting the NFS server will do the same:

Change the assigned server of the image LDAP object:

If you changed/updated the image, do not forget to change the md5 file as well:

Now set the clients to check for an update on next boot: 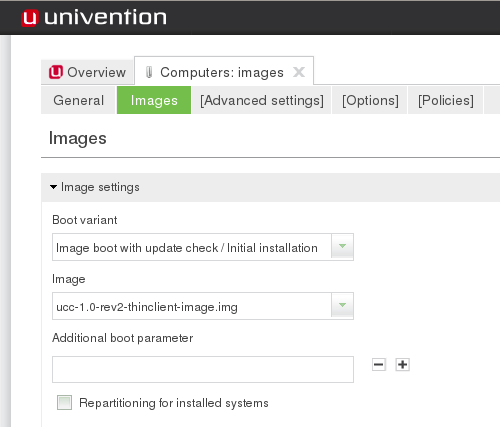