This article is about the univention-printer-assignment package, as well as the functions of this package and the handling on the site of Windows Systems. The package "univention-printer-assignment" searches over the LDAP service for all printers in the network and sorts them alphabetic according to their group affiliation. The printer that was added first, in the alphabetic first group will be flagged as the default printer.

The package univention-printer-assignment is available in the Cool Solutions Repository for UCS 3.0 and can be installed after activating the repository:

After installation, printers can be assigned to groups in the group administration in the Advanced settings tab. The printer definition will be distributed to the corresponding Microsoft Windows systems via Netlogon. 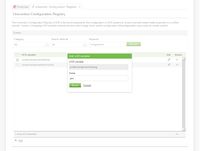 Setting the debug variable on yes, by using the graphical interface

For the univention-printer-assignment package are variables available, that can be set for testing the functions of this package.

Setting the removeall variable on yes, by using the graphical interface

Another feature of the univention-printer-assigment package is the removeall variable. If this variable is set and the printer-assignment.vbs will be executed all printers in the network will be deledet from the printer overview and new printers will be added in the printer overview.
To activate this variable over the grafical interface, you have to search in the Univention Directory Registry for *assignment* and set the printer/assignment/removeall, just by clicking at the variable an change the previous entry to yes.
To set the variable in the command shell, the following command is needed.

Windows The printer-assignment.vbs script is found in the network on the logon server in directory \\%LOGONSERVER%\netlogon. It is sufficient to execute the file as the domain admisitrator. The sorting of the printers, as well as the setting of an default printer are processed automatically.